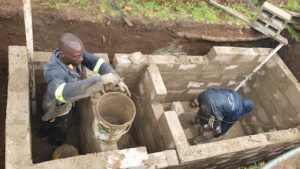 So far this year the diving has not been good. The last outing we had was actually so unimportant that we didn’t even bother to write a dive report.
But i dived with my rebreather and despite low visibility and low shark sightings i still love to be in the water.
From Sunday we get busy. 3 boats
And Friday next week we get the Discovery Channel Film Crew.
Unfortunately or fortunately i will be in Germany by then sampling Bockwurst !!! 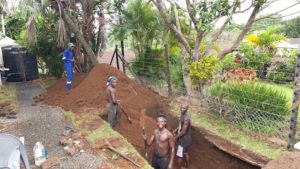 Our tractor is still broken and we are in for a massive repair bill.
We will have to vacate our boat parking property because the whole place has been sold…Where do we go with 4 massive boats !!! Luckily we have a solution.
Our Toyota was broken and is fixed again.

But the real disaster is the sewage system at the Diver Villa.

It all started when my mate Supp was staying in the Garden Cottage. He phoned me and told me he crept heavy and jammed up the toilet.
Who needs news like this !!! So i took the pressure cleaner and the drain cleaner pipe to him and watched him working the shitty pipes for hours. After a huge effort he managed to get the loo clear.
Three days later the entire sewage system collapsed. Every single toilet was blocked.
I phoned my handyman and friend Jaco who is available anytime of day and night.
A gem !!
On his birthday he came out and worked the pipes. After hours of pumping pressurised water in he decided to bring his workers and dig down.
For days they were digging. 3m deep and an endless distance long right into the neighbour’s garden.
It became a downright mining operation…
Eventually Jaco called the professionals in Draincleaners of note with a machine from hell…
To no avail.
After days of mining, Jaco tells me we have to stop and rather build a new septic tank.
I did not like the idea of a septic tank but he convinced me after much arguing.
So off the guys go and dig half my house out. Seriously, the tank could as well have been a swimming pool…
Instead i spend all this money on an underground crap system…So frustrating.
I hope this works and won’t cause shit !!!!! 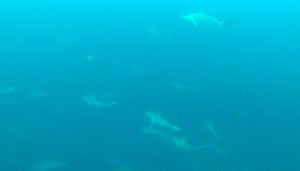 2.1. 2020
Really guys, today was by far the best dive of the decade !!!
Weather terrible with heavy rains all day.
Launch difficult with waves all over the place.
Sea rough and uncomfortable.
Visibility 10m – 15m
Sightings : School of hammers in the distance, 3 1ams, 2 Black Tips, 1 Sandshark
Watertemp. 25˚C
Thankfully we still have 3648 days left in the decade !!! 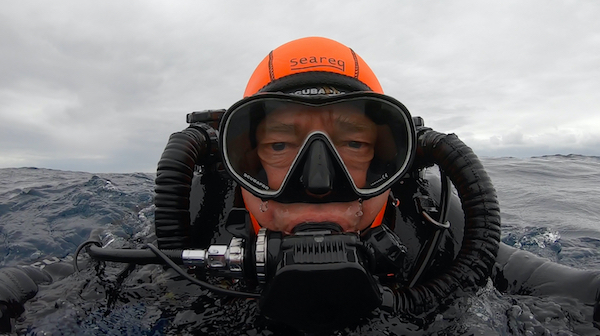 2019 was a great and a complicated year for me.
We have been very busy especially from March to August. Lots of stress and headaches but we managed well.
We had many mediocre dives during some period and we had mostly memorable dives like never before.
So for example we had in excess of a thousand raggies in July. Never seen so many raggies ever in my life. A good season had somewhere between 200 and 300 sharks but never such a ridiculous amount.
Tose divers who were there will never forget !!! Myself included.
Also in July we had hundreds and thousands of hammerheads. Way too many.
Never seen hammers in July !!!
I worried we won’t have a good hammerhead season in November, December but luckily i was wrong.
November and December was an amazing time. Thousands of scalloped hammerheads were the norm !!! Believe it !!!
Also tigers. We had so many tiger sightings in the last two months. Usually we might see a tiger in November a couple of times. Last year we had tigers in November and December at least 5 times a week. Unbelievable. But nice !!!
Take into account that August, September and October we were on holiday and the guys hardly dived.
Protea Banks is just an amazing place to dive and this last year just nailed it again.
Hopefully the declaration of the Marine Protected Area will in future work for the animals. It was declared and gazetted on 1. August and since then we need a special permit to operate and also our divers need a special permit to dive in an MPA.
But this 50bucks permit is valid all over the country where there are MPAs
So it is a small price to pay for a hugely great effort to conserve our oceans.
In 2019 nobody came to check our permits and our actions. I am sure this year we will be controlled. No problem for us.
BOOT Expo 2020 from 18.1. until 26.1. in Duesseldorf, Germany
In hardly two weeks time we will be off to the BOOT Messe in Duesseldorf for our tenth time. As always we are looking forward to seeing our past and future dive clients and friends. Never a dull moment at this show.
The sausage factories are working hard to build up enough stock to satisfy my craving

After the show we will spend 2 weeks with mother. She seems pretty stable in her new life as widow. Hopefully we can convince her to spend a few days away from home for a change. Maybe Oberstdorf would be a nice place to go or our favourite place in Austria, Schwarz Alpen Resort. The best !!!
After our visit with mother we will spend a week in Georgia, part of the former Soviet Union.
We saw a couple of adverts about winter in Georgia on CNN and decided to check it out.
Will spend the first day at Tbilisi, the capital and then get a transfer to Gudauri which is a wintersport town 2100m above sea level.
Here we are chilling in a splendid hotel and hopefully i will manage to spend 2 days on the famous slopes of the Kaucasus Mountains. If at all possible i want to see if i can organise myself a seat at heli skiing.
That could be something else !!!
So the new year is promising. Let’s hope it will be a special year for all of us
And i promise to write more ….