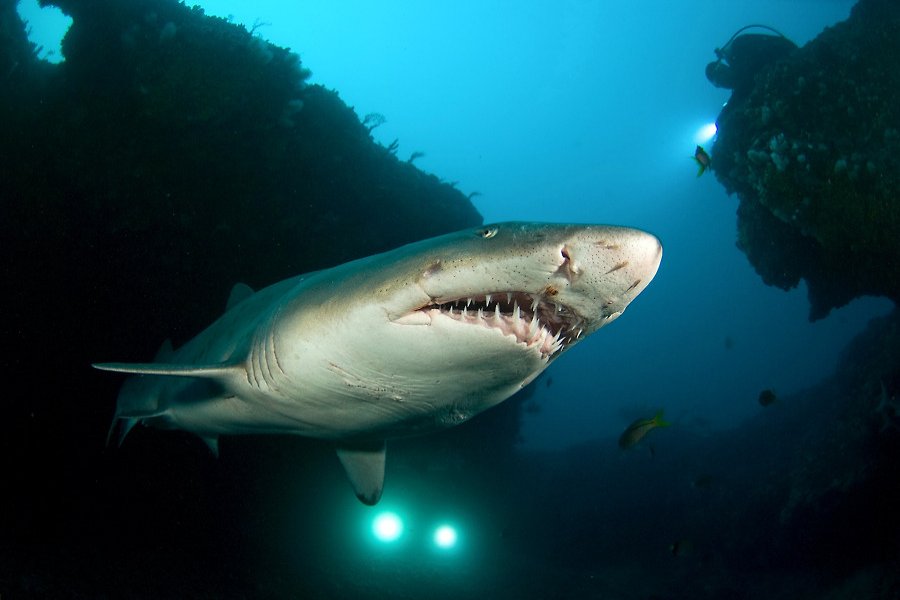 The Raggies , as they are commonly known in South Africa are bottom dwelling, gentle and peaceful animals. They usually stay in the caves at the Northern Pinnacle of Protea Banks where they are protected from predators like Bull Sharks and Tiger Sharks.

Each Raggie has its individual spot markings similar to our human fingerprint. There are no two Raggies with the same spot pattern.
Because they spend a lot of their time in deep, cold water where there is very limited light, their eyes can multiply the ambient light by 20 times and so see very well in the dark. This is the time when they hunt their food which consists of rays, frustrations and small fish.

Once the Ragged Tooth Shark has arrived on Protea Banks, usually on the last weekend in April or very early in May, we know, there will always be sharks to show our divers until they depart sometime in December.

During June and July we see a mass of Raggies amounting often to several hundred sharks. Especially when the water is cold, the raggies are all over Protea Banks.

First only male Raggies arrive. Then, later in the year females and juveniles arrive. The numbers change all the time. It appears that if the sea is rough the Raggies move into deep water off shore and once the storm is over they return to the Northern Pinnacles.
We do see Raggies on the Southern Pinnacle and on Playground. On days when we do, we know, they are spilling over from the Northern pinnacle.
If dived at the right time, Raggies can be seen everywhere one looks. Last year i estimated close to 1000 sharks on one dive…

The Gallerie of the Ragged Tooth Sharks