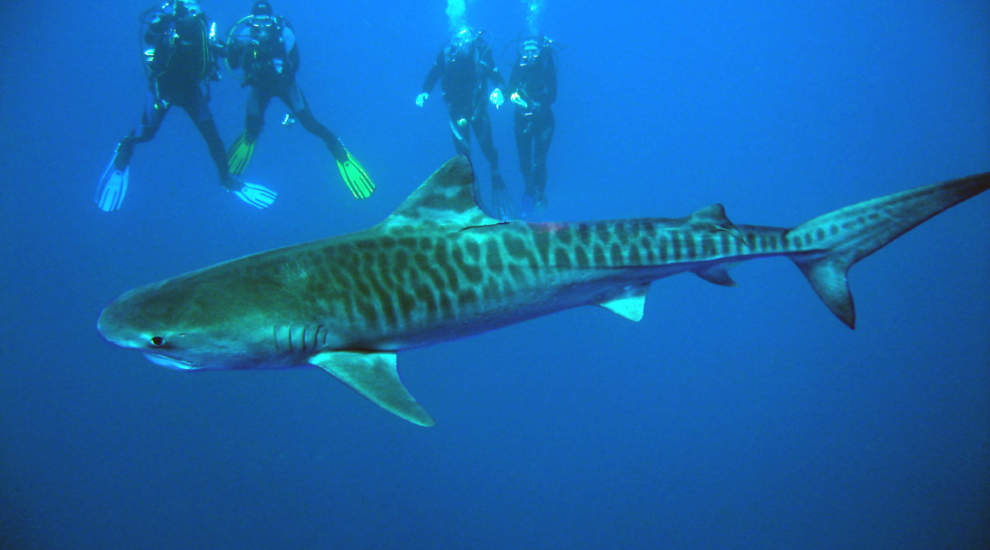 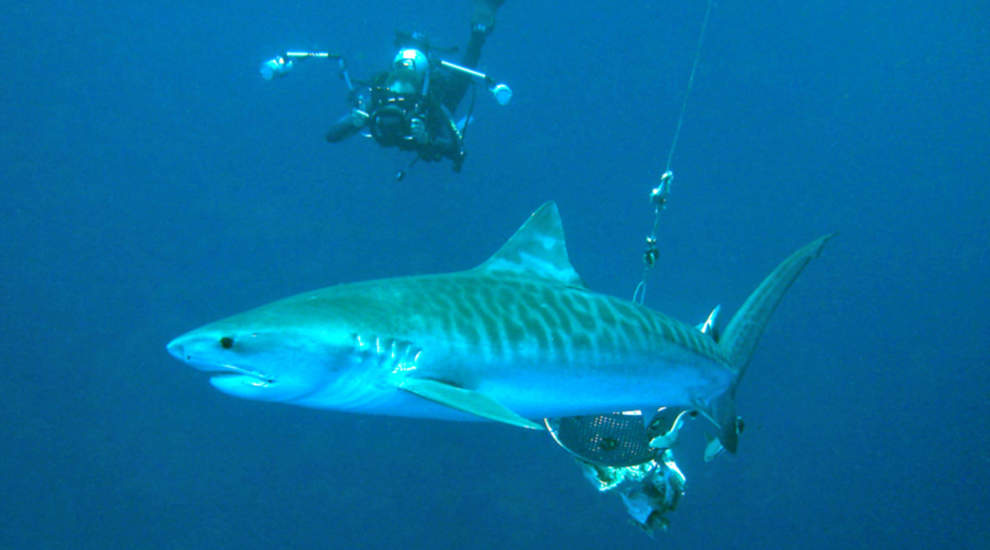 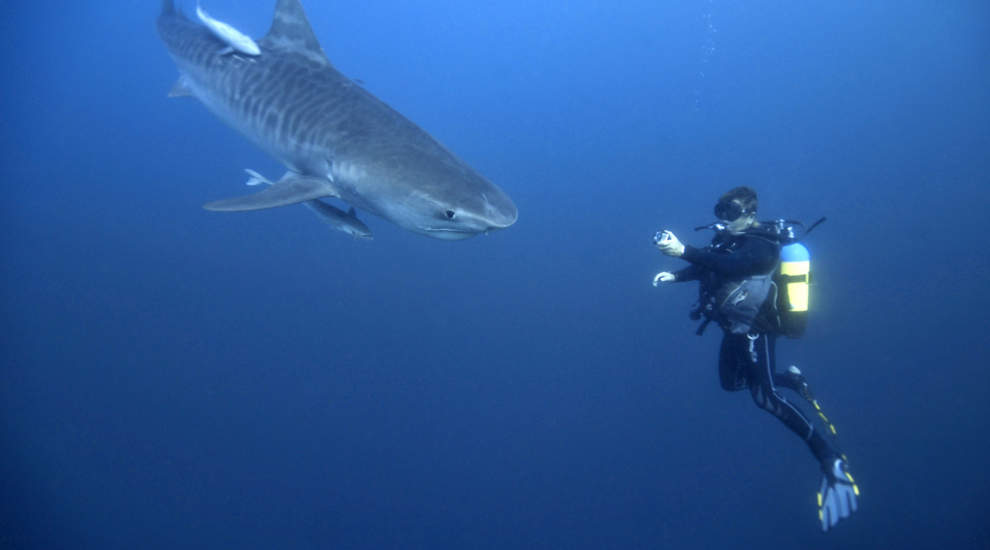 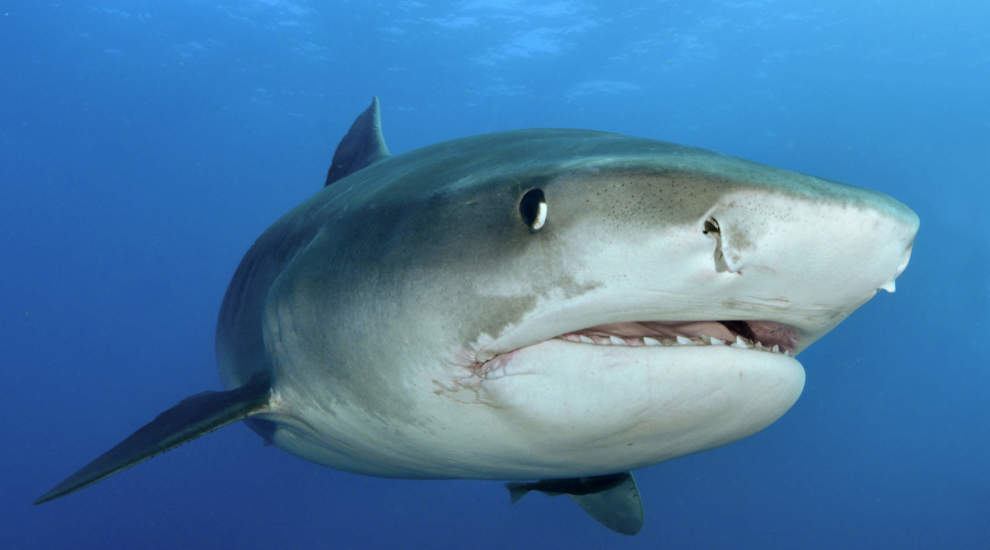 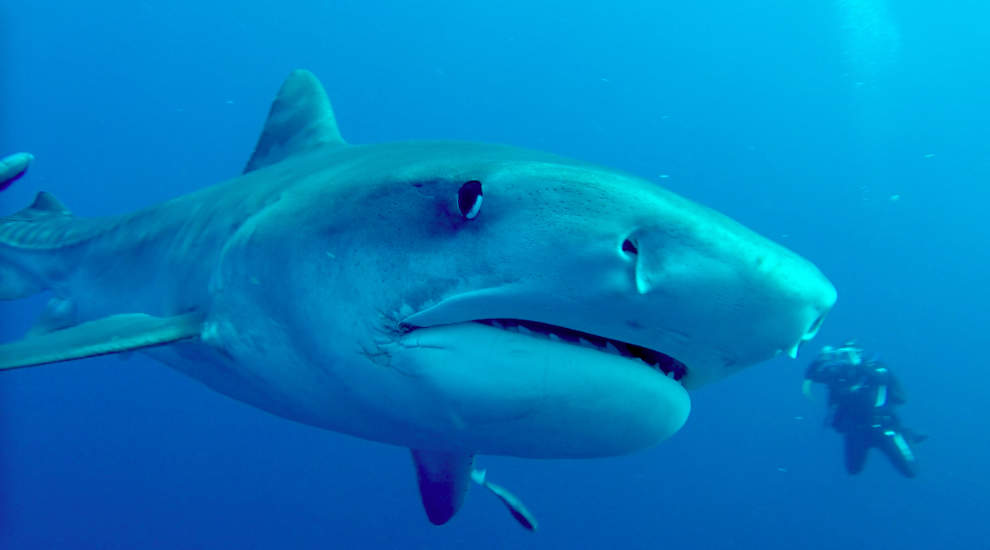 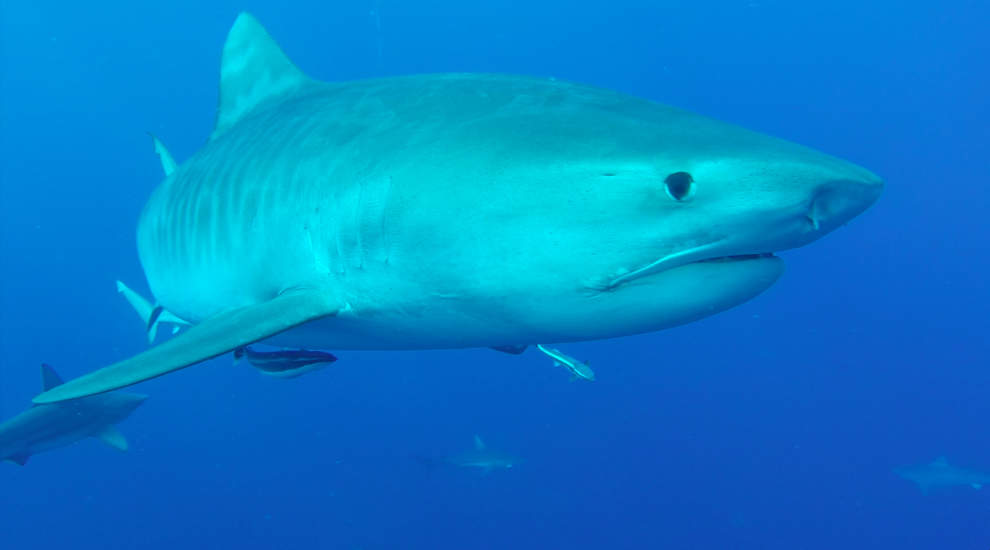 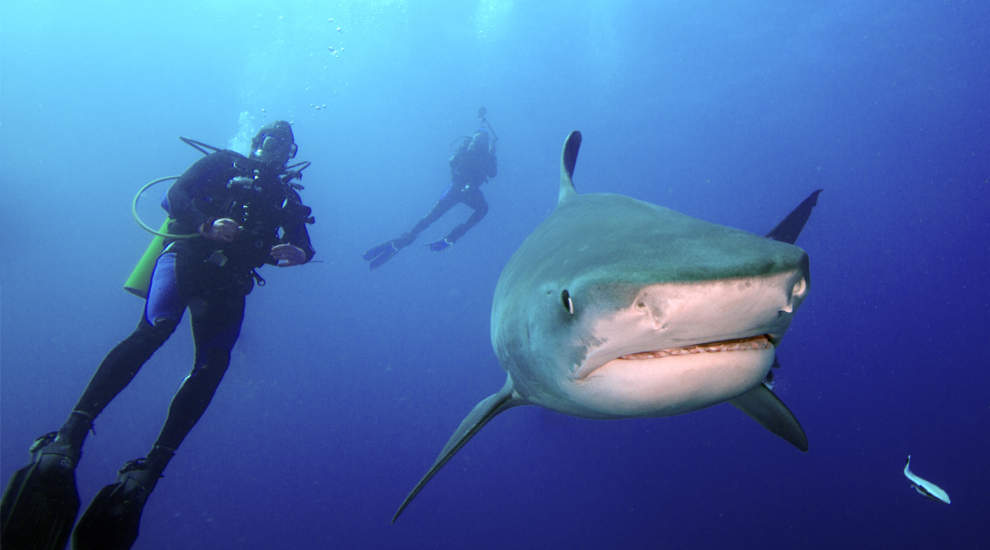 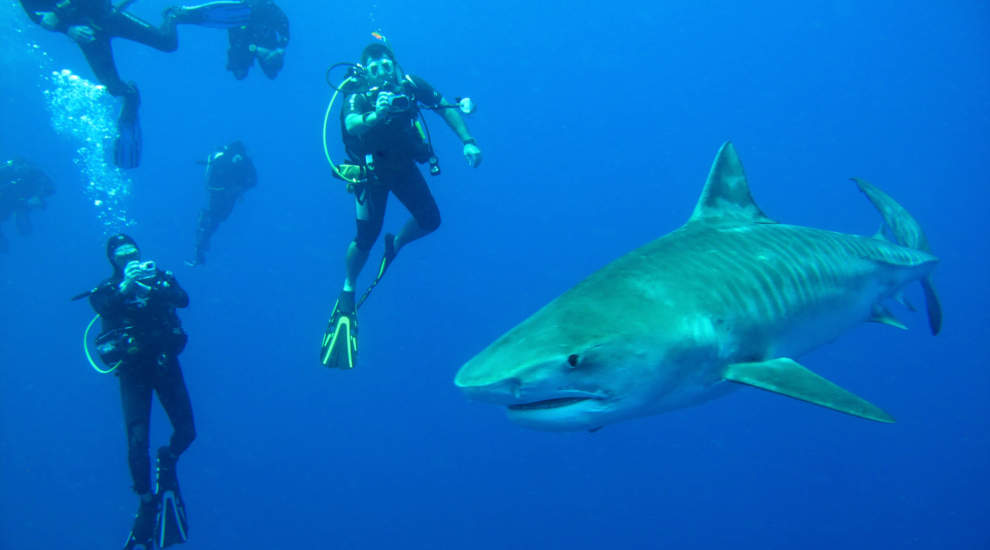 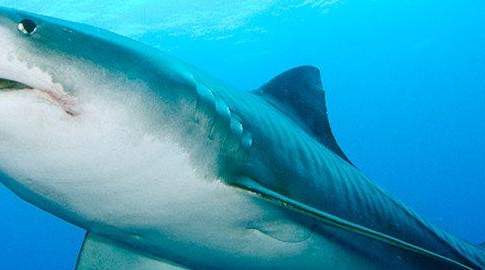 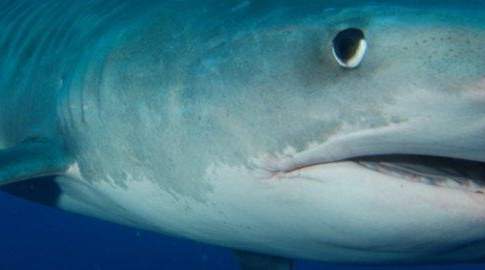 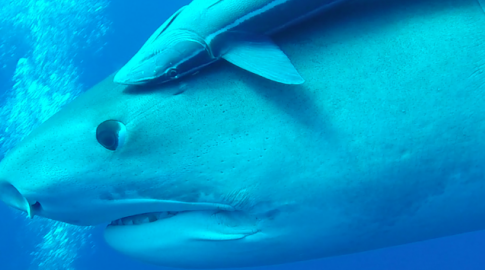 Shark Diving does not get better than this 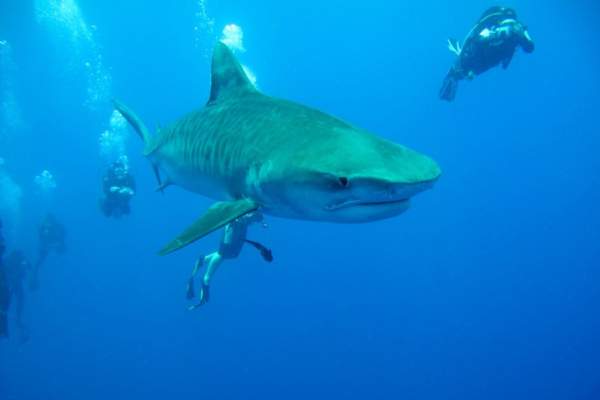 Roland Mauz, owner of dive operator African Dive Adventures: “It is our aim to bring the Tiger & Bull shark experience close to as many people as possible. We’re convinced that the more people can be educated about sharks and their behaviour, the better the shark’s chances of survival will be. Previously it was the privilege of the brave few who could venture into the depths of the oceans on scuba in order to encounter these magnificent creatures and learn to understand them. This was a good start but no-where near enough to change people’s perception of sharks. So we have decided to offer this opportunity to more people and created new options where divers can experience real and close up shark encounters in the wild.

Before and after such encounters, the participants will be properly briefed and educated about the experience and the role of the sharks in the sea, recreational shark diving and safety.
Although Tiger sharks grow slowly, their average size is about 400cm/12ft.
Galeocerdo cuvier, its scientific name, feeds on fishes, other sharks, turtles, birds, invertebrates and even garbage. Although no accidents have ever been recorded on Protea Banks, large Tiger and Bull sharks do happen to swim right close up to scuba divers. Cageless baited Tiger and Bull shark diving is obviously not for the faint hearted, however, in order to keep the diver as safe as possible in such a baited situation we strictly adhere to a protocol.

We start with a special Tiger Shark Dive Briefing and explanation of code of conduct ( see below ). We then drive out to Protea Banks, drop the bait in the water at about 12m/36ft depth and wait until the chum slick has dissipated and a tiger or bull shark has picked up the scent. This can take anytime from 5 to 30 minutes. We regularly check the bait station in order to see if a shark has arrived.
As soon as sharks are circling the bait, the divers enter the water as quietly as possible and swim slowly towards the station, keeping a safe distance and level off. All divers stay together in a tight group and will be closely watched by the Bait Master.
It takes divers about 5 minutes to understand the situation and relax. Sharks need about 30mins to drop their instinctive fear of the unknown.
Scuba divers as well as bait will be drifting with the current as the sharks swim round and round and right in between the divers.
If somebody drifts away or goes too deep the Bait Master will call the diver back by using his under-water hooter.
We don’t call a time out after an hour. Instead we pride ourselves by giving our divers an unlimited experience. The last diver out ends the dive. Usually these dives last between 75 to 90 minutes which gives the diver excellent value for money. 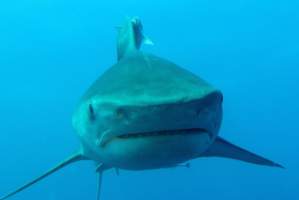 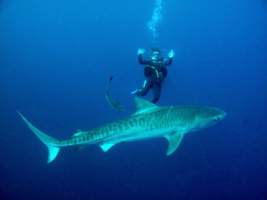 A baited Tiger Shark dive is classified as a ‘high risk dive’.
The reason for this is that we are in the water with a shark that is in a feeding situation. Although we don’t feed the animal, it thinks there is food and therefore reacts to the bait accordingly. In its quest to get this food the shark could possibly react to divers differently than during normal, unbaited encounters.
We have seen how carefully the shark closes in on its target, the bait station. This process could take up to 20 minutes or longer and can even be aborted.
At first the shark picks up the smell of the chum and follows this closer to its source. When the shark finds the bait, it circles this widely and the circles get closer and closer with time. Thereby the shark checks its surroundings very carefully.
Sometime during this assessment process the shark will swim a little closer to the divers and with time it realises there is no danger or threat.
It then comes closer and closer to both, the bait as well as the divers which makes for spectacular sightings and photo opportunities.
The idea is obviously not to give it the food inside our eco ball in order to keep the shark interested for as long as possible.

The Protocol or Code of Conduct

To date (Oct 2016) we have done 988 Baited Dives and by respecting the following protocol we can proudly say that we’ve never experienced an accident with sharks or even as much as a threatening situation.

– In order to create a baited shark diving experience the minimum visibility must be such that our eco bait ball is visible from the top (= approximately 30ft/10m).
– The maximum number of divers on a baited shark dive should not exceed 10 plus 1 underwater controller.
– The sharks will not be fed while the divers are in the water.
– Divers need to be globally aware as soon as they enter the water. A constant look-out is critically important and the closest shark needs to be observed at all times.
– Divers will have to level off at 10m-12m/30-36ft of depth and stay at this depth during the event. Maximum depth is the bait station depth. Divers dropping off might create a special interest for the shark or in many cases cause the sharks to go deeper and as such destroy the close encounter experience for other divers in the group.
– Divers need to make sure they stay out of the chum slick.
– Divers will have to stay upright in the water at all times in order to show the shark that divers are foreign and should not be mistaken by a marine living species.
– Divers are recommended to wear black or blue fins as strong colours or reflections sometimes attract the shark’s attention.
– Divers must tie up all hoses, lanyards, buoys etc. so nothing hangs dangling off the person.
– Divers must stay in a group on the opposite side of the chum slick. The shark must have easy access to the bait as well as an easy escape route away.
– If a shark comes too close to a diver, the diver can blow air from his octo or build a wall with his legs and fins to scare the shark away.
– Under no circumstances should a diver start swimming away, descend or ascend. This will attract the shark.
– Nobody should ever touch a shark.
– Nobody should ever display aggressive behaviour towards a shark as this will cause the shark to become defensive itself.
– Divers have to understand the risks involved in a baited shark dive.
– Divers have to sign a special indemnity.
– An extensive briefing is always given by the Dive Master to all divers prior to any Baited Shark Dive

Find out what kind of shark the tiger shark really is and learn how to safely scuba dive with these awe-inspiring creatures of the ocean. African Dive Adventures is one of only a few operators in the world offering you this kind of magnificent shark diving.
It is an experience one never forgets !!! 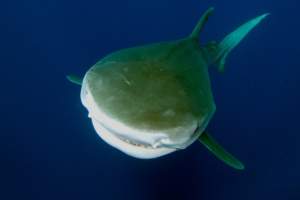 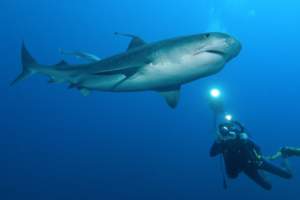 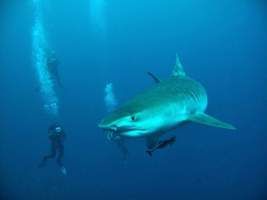 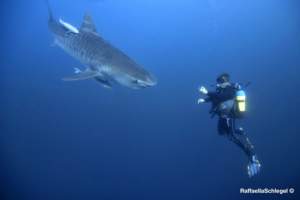 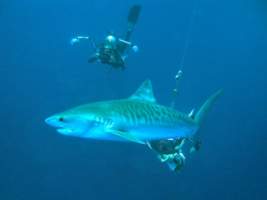 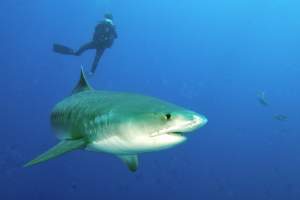 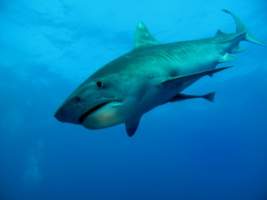 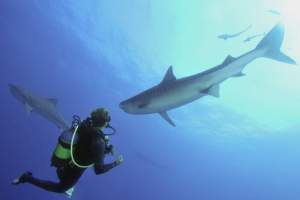