Jou, longtime since i last checked in here.

We had a lot to do in the last two weeks.

Both weekends we had groups of JoBurg divers. Of course we are a bit rusty so we needed to do quite a bit of preparing and planing to make sure everything runs smoothly.

This time of the year the wind is still a real threat so we worried whether we could get all the dives done without being blown out and loosing the business. Not now, buddy, no way !!!

This was a bit stressful, especially when we had to run against the wind.

Super early meetings at 6am and launching before 7am to beat the wind. This means the alarm goes off at 4.   Almost night shift. It is anybody’s guess what time i passed out in the TV lounge at the end of the day…

Some of the guys have grown up while they were with us !!!

But luck was on our side, we got all booked dives done and every dive was magic.

Not bad at all.

In the First Cave we still have 12 Raggies.

Oli, the Tech Instructor of Urban Dive took his tech divers to Wild Oceans, our new reef. I couldn’t dive with Oli as i had to guide another group, so i just held my breath and hoped for the best.

Oli and his tech divers came back and were blown away. They had the most amazing dive on this new reef of ours , encountered a Tiger Shark, a Bull Shark, a number of Raggies and Black Tips.

For this successful dive Oli was allowed to give this new reef a new name and called if Wild Boulders..   Quite a thing !!!

As the divers moved out, the scientists from SAAIB moved into the Diver Villa.

These guys gave me a very good idea of how to get real amazing footage of the Hammerheads. I will experiment one of these days and show my results here.

( the photos of the hammerheads are from my archives ) 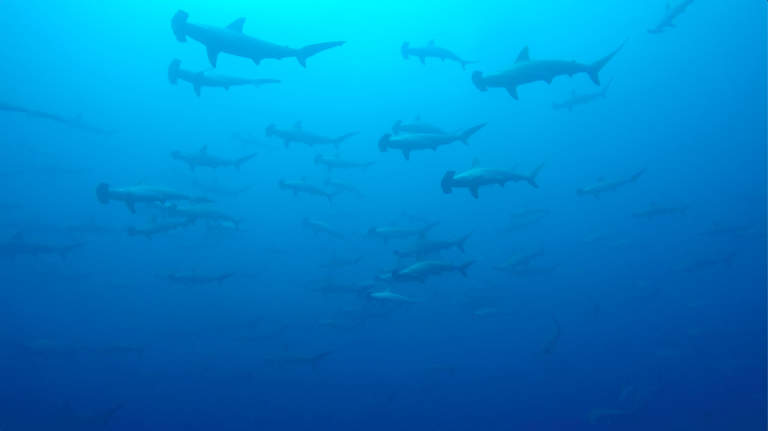 We went diving on Protea Banks again today. We have a small group from Johannesburg.

Last dive was last Sunday when the vis was pretty bad. So naturally i was worried. Added problem was a strong NE’ly forecast. Actually it looked bleak for this weekend.

We decided to see what happens and met extra early at 6am to avoid the wind. But as soon as the sun woke up at 4h30, the wind also got out of bed.

The harbour was open when we arrived and we decided to take 2 cylinders each just in case.

Our first dive was on the Southern Pinnacle of Protea Banks.

We literally fell on top of a school of  about 50 dolphins .

The weekend was safe !!! Especially as we had amazing visibility 20m-25m and nice 1.5kn current.

Shortly afterwards we saw the first school of hammerheads, then the second and later the third. We estimate 300 – 500 hammerheads if not more.

This is the first decent hammerhead sighting this season. I am most happy about that !!!

We finished the dive with about 10 Guitar Sharks at the end of the reef. Magic

As we had two cylinders each there was no way we would go back to land without a second dive.

60% of our guys did not take too well to the motion of the ocean, but we had no mercy.

The wind freshend up quite a bit and the sea was rather rough. But the sun was shining, it was warm and not dangerous. Just uncomfortable…

Second dive was on the Northern Pinnacle of Protea Banks. What a question !!
Here the vis was even better.

In the First cave we found about 15 Raggies. We spent some time with them to photograph and cut off some fishing gut which was hanging out of one of the shark’s mouth including a lead sinker.

Glad i could help.

After the caves we carried on drifting , saw 2 Zambezis and another three schools with hammerheads.

Just after 10am we were done with the second dive and headed back to shore as the sea was getting rougher and rougher.

Not a bad day at all considering it is Friday 13th !!!

again for everybody. The government has decided that everybody and anybody can travel to our country as long as the traveller has a which is not older than 72 hours.

No quarantine needed and this will remain in place. It makes sense. Why should a traveller who is healthy not be able to come here ?!!!

So we went diving on Sunday.

We had no idea how many divers would pitch when we arrived at our shop at 6h30.

One car was already waiting there. So, great, we have at least two divers.

Then another guy arrived who was originally supposed to be two. But hey, it is Corona times and we have to be grateful for what we get.

Just as we get ready to move to the harbour another diver arrives. It was the guy who was supposed to dive Sunday but we did’t hear from him anymore.

I had loaded one cylinder each when one of the guys said, take two each.

I looked at him and smiled. Sure. In seconds i loaded another cylinder each. He told me, he will convince his wife once we are out there.
In the harbour was yet another diver waiting for us.

Man, that would have been five…

When i told him, we might do two dives if the one guy could convince his wife, he also wanted to warn his wife about coming home later.

I told him not to phone because it is always the same when guys ask their wives if they can dive or not !!!

It is better to ask for forgiveness than to ask for permission, serious !!!
Needless to say, he had to go home…

He is still young and has to learn a lot.

We then launched into a flat sea under a cloudless sky.

It was a perfect summer’s day.

We all burned our faces…

First dive was on the Southern Pinnacle of Protea Banks.

The vis was around 7m. Not good at all.

Hammerheads and one Zambezi.

I thought this was it for the day but Spike suggested we go to the Northern Pinnacle of Protea Banks and see what the water looks like there.

Indeed it was looking nice and blue.

So we decided to dive the Caves of Protea Banks.

It turned out, only the first five meters were clean, the rest was just as murky as on the first dive.

But the Caves is always a really nice dive no matter what vis we have there.

We had 15+ Raggies in the First Cave and loved it.

In the end all were happy. Spike earned his fee for two dives and i also had a couple of bucks left by the time i got home.

Hi guys, so this is my new website. Hope you will all like it and all the tricks i can do with it.

It is a mountain of work to get it designed at first and then get all the texts of the last 11 years across. My job is now to load every single photograph i had on the old website. Just to give you a rough idea, to do one month in one language takes about 2-3 hours. Then i have to do the same in the other language…

Martin just sent me a message from Florida where he and Holli moved to after they got out of South Africa in October.

There two kept us company from June to October by doing all dive courses from Open Water right through to Dive Master.

It kept us sane and connected with our beloved Protea Banks.